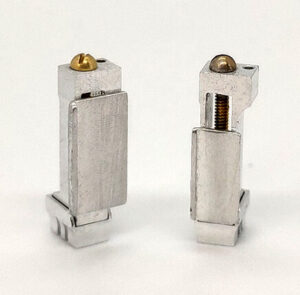 The R2Drive is a recoverable and reusable metal microdrive developed in the Buzsáki lab. It is part of a head-gear system for rats or mice.

Like our 3Drive, the R2Drive works with most commercial silicon probes with a flex cable, and can be made compatible with Neuropixels probes.

A major innovation is that the drive sits on an implantable base and can be removed from it after an experiment for reuse. This allows a probe mounted on the drive to be reused multiple times, resulting in significantly lower costs for experiments and less experimental interruptions due to silicon probe lead times.

In addition, a probe mounted on an R2Drive can easily be connected to a stereotax for acute recordings, allowing you to share probes between acute and chronic experiments.